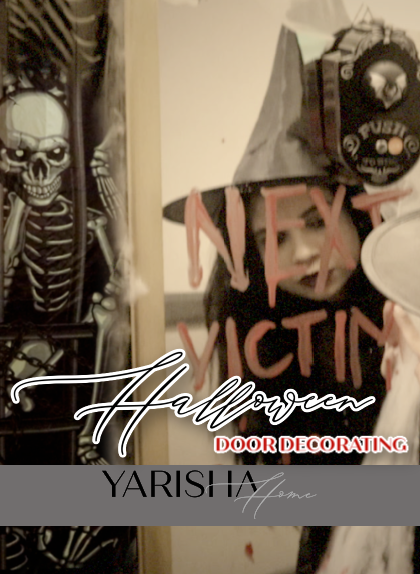 One of my favorite things to do is set design, creative decorating and visual storytelling, so you can imagine my excitement when our building announced a Halloween door decorating competition. This was last Halloween when we lived in an apartment community, and I was pleasantly surprised at how game the residents were and how extreme and serious they took the competition. Halloween door decorating was absolutely new to me but I really wanted to go all out and create a story to go with the decorations and to visualise my concept through a tale rather than to put up random Halloween decorations.

While we no longer live in an apartment, I must admit that I truly enjoyed the concept and walking through the property viewing all the creative presentations. I was honestly and humbly thrilled to be chosen as the best decor and winner of the competition.

Here’s the story that I created for the presentation, I hope you enjoy the video and maybe get inspired with some ideas for your Halloween decorating this year.

Loud noises, footsteps, bangs, strange cries and sounds were reported after occurring at late hours in the night. The apartment has been documented as vacant after the last resident’s exit.

Previous resident, CRAVEN, DAVID JNR., was a single occupant who suddenly disappeared with no notice or communication. After in-depth examination, review and analysis, the following has been detected. No being has been found residing in the apartment, evidence has been gathered and collected of several acts of crime. No victims have been found, however it is believed that the apartment is haunted. The findings show that three spirits guard the apartment entrance, several victims are trapped in a skeleton-like form chained and locked within the walls and the remains of unsubs are stored in a refrigerator system that has been infected by rodents and insects, covered and hidden by a blood covered and splattered white material.

The last sighting of CRAVEN, DAVID JNR. was of him entering the trash room. He was in possession of white trash bags with red blood-like splatters on it. It is believed that he roams the hallway at late hours of the night, on the hunt for his next victim. All residents, visitors, staff and individuals on the property are to be warned.